Another relaxed easy start to the day for us. Our time here has been drawing to a close on Kaua’i so we are trying to get in a few more sights before we head to Kona for the second week of our vacation.

We began with a late start but that was okay because we weren’t on any schedule, we are on vacation after all. We decided to head to a local place for lunch (we started off that late) called Ono Char Burger for an off the beaten track for some good old-fashioned home-burger style cooking. The woman taking our order was the age of a grandma. She was awesome…and so was the food. We both ordered burgers and we shared a basket of onion rings. I generally order the “named” food of whatever establishment we eat at. In today’s case I ordered the Ono burger. It was fantastic.

Afterwards we headed down the road a bit to the “downtown” section to take in a number of shops. For starters we headed to a market off the main drag that had tons of gazebo style shops with all the same merchandise largely made up of dresses, shirts, necklaces, wooden spoons and other brick-a-brack. We decided not to get anything at this point.

We also stopped at Java Kai for a caffeine and pastry boost. Afterwords we walked down the street and visited a rock/crystal shop, two glass shops (one actually blew glass within the store front itself), a thrift shop and a general store that sold laminated maps of the islands, of which we bought three, spices, shaved ice the size of a small umbrella and calendars by the bunches (we bought two of these as well).

Finally we made our way to an awesome beach where we go to see tons of sand crabs that amused us immensely. We met a local, or one of the “original hippie howlies” as he put it. He said he had owned the oldest running surf shop but had to close it down due to the larger islands being able to mass produce the same product for much cheaper prices. sound familiar? He was not bitter, he only mentioned it as a matter of fact and was going about his merry. 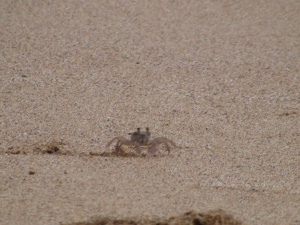 We stayed for about an hour or an hour and a half before the weather started to kick up sand and I got bored. Sadly I left my book at home. Once home we headed out to the pool and our ultimate goal, the hot tub where we met another couple recently enjoying their retirement coming to the islands for the first time.

We talked with them for a period of time and then headed back to our condo. Before we could make it all the way I had to swim across the swimming pool a couple of times. I did this with my eyes open which was a HUGE mistake. My poor baby blues felt like they were on fire and I had to stumble my way back to the condo in a hurry so I could rinse my eyes out. My eyes are still paying the price hours later.

After a brief period of time watching the news while Jess rinsed off the hot tub and pool we headed out to a local place that we went to for chinese food the other night. This same place is part of a small collective of shops that serve food and shares an common area for all people eating to use that often has a live person busking for tips playing some instrument. When we had chinese the musician played guitar and tonight’s entertainment was a sax player. Jess did strike up a conversation with the musician who happened to camp and fish in Oregon years ago.

Again we find ourselves at home enjoying the last few hours writing, watching news and other TV while enjoying a cocktail made from rum. That seems to be a theme of our nights.

This entry was posted in Hawaii. Bookmark the permalink.