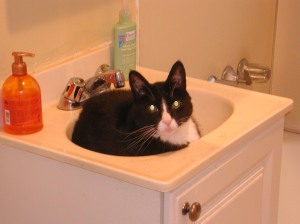 Why does everybody keep looking at me like that?

Over the holiday weekend my wife received the sad news that her parents cat Dan had passed away. Nicknamed “Pussy Dan” I believe after Dan Marino of the Miami Dolphins. Dan was not just her parents cat but was the family cat for them all while all the kids were still at home during the mid to late nineties.

This post is to honor the memory of the cat I knew as Pussy Dan as well as to celebrate his life and how he positively impacted the lives of the people around him. If any of the family reading this post would like for me to remove it I certainly can as it is not intended to cause any stress. 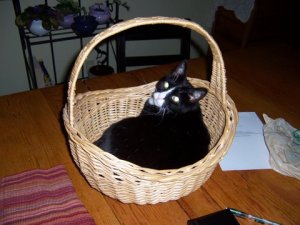 What!? Like you were gonna see anything this cute today anyway.

Here are a few musings about Dan as relayed to me by my wife along with a couple of my own experiences and personal thoughts on the matter. Certainly there are more stories out there and I would love to hear them. If you have a such a story and want to share please feel free do so and let me know if this is something you want kept private or not.

My wifes parents had just got home for a little R&R after a couple of months of fairly constant travel. With Jess’ parents watching our place in Portland and then visiting Becky’s family in Seattle for Christmas it was pretty routine for Dan to find himself on the road again.

Dan was a traveling cat as were the dogs that came with Jess’ parents on every road trip but Dan had made more than just the relatively short trips of visiting family, he made journey’s from city to city with the family as they moved for the past 15-16 years.

As I understand it Dan was not chosen to be a part of a family from behind the glass of a shelter, pound or rescue but rather chose the family he felt best deserved his cattitude. As the story goes he followed Jess’ mom home from work three days in a row after which they finally got the message that they were his family now and that they should really just open their doors to him.

They opened their doors to him and soon after their hearts. One can resist the awesome personality of a cat for just so long before succumbing to its charm and character. Dan had both in spades!

My personal experience with Dan was very limited. I met him about 5 years ago when I first had Christmas at my wifes parents house. Like most cats Dan was curled up on the rocking chair on the lower level near the fire-place, because really, that was the best place to be.

He was not terribly animated like some cats that fawn for attention, he was more the type to sit and wait for you to come to him for the benefit of a few strokes of his wonderful black and white fur. He was also not much of a talker. He would quietly “meow” or in more recent years “mow” with barely a whisper escaping his mouth.

To me Dan seemed a tolerant cat as well. Not only did he take road trips on a regular basis but he also suffered the ultimate indignity of accepting another cat into his home. Spicey Beav was his name and initially when he was a tiny kitten was pretty awesome but ultimately became more a pain in the ass towards Dan who was more a lover than fighter and would regularly get pounced on by a much younger cat flexing his pouncing skills.

Ultimately Dan would have the last laugh on Spicey Beav as he was last seen in Arizona after the door to the camper opened somehow. Whether or not Dan had anything to do with it is mere speculation at this point but I have a feeling that he didn’t lose any sleep over not getting pounced upon any longer.

To wrap things up Dan passed away during the evening of New Years Eve or the early morning on New Years Day curled up in his cat bed. I imagine somewhere close by the fire. Where is was comfortable and warm.

He is survived by the five bipeds  (+ 4 additions) he adopted all those years ago along with two canines.

The take away I have from this is that if a cat can provide so much joy and if I believed in reincarnation I would certainly consider the idea of joining the four-legged, furry faced feline community and would hope I could find a wonderful family to call my own.

Dan will be missed.

This entry was posted in Everyday Buzz. Bookmark the permalink.