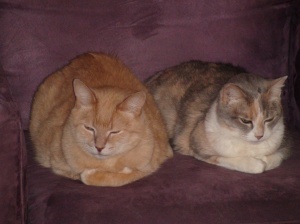 This is Manu (grey/white/orange) and Axl (creamsickle). Manu is named after the NBA basketball player Manu Ginobli because of her uncanny ability to mimic his awesome flopping prowess on the court. Hers never involved a foul however. Axl is named after the famed Beverly Hills Cop character, Axl Foley, played by funny-man Eddie Murphy. 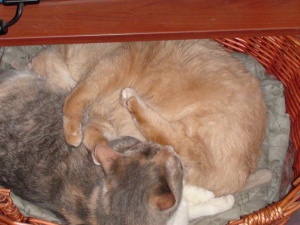 Hard to keep these two apart

My wife took over care for them some eight years ago when a lovely lady who was unable to further care for them sought someone that could care for both cats instead of breaking them apart. At the time the cats were thought to be about seven years old. They were litter-mates and were inseparable. 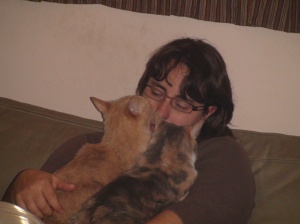 Both cats vie for attention

Both cats were about the best cats anyone could ever hope to have. As mentioned earlier Manu was a flopper, when I arrived home from work or wherever, her way to greet me was to flop onto her back on the kitchen linoleum and gyrate and roll side to side. She also had one of the loudest purr-boxes that I have ever heard. Not only that but she would purr no matter what was happening to her. You could grab her and give her a hug or rough-house play with her or whether she was simply laying on your lap via sneak attack lap-bomb (her personal favorite choice) she never wavered in purring. I almost forgot to mention her need to burrow and snuggle (generally in freshly shed clothing) so that she was as comfortable as a cat of her station should be. 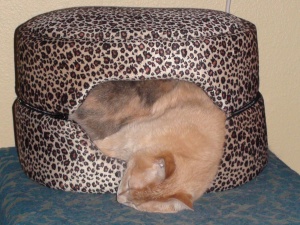 Axl and Manu cozy up in a cat condo

Her brother Axl, on the other hand was never fond of the flop technique or purred very loud or even did the lap-bomb. His actions were altogether unique and very much his own; generally if you sat down he would simply walk up to the chair you were sitting on and stop at the edge of it, put both front paws on it and stretch. Once done with his stretch he would look up at you and meow informing you of his ensuing actions, which were to hop up and find space next to you in the chair…even if there was none. This technique can be seen here in a cat condo we picked up somewhere. He was never one to give up just because there was no room. 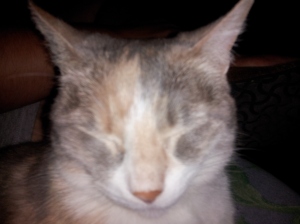 The flash made her close her pretty green eyes

For the past eight years my wife and I and all our friends who ever visited have had the pleasure of getting lap-bombed by our little pretty-kitty.

A couple weeks ago while away on vacation our Manu got sick and lost half her body weight. The vet said renal failure. All we could do is make her comfortable and be there as much as possible but there was nothing to reverse the effect. Time would take its natural course. 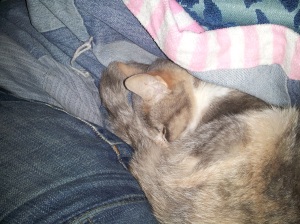 This past weekend Manu was to the point where we called a couple different places about the possibility of euthanizing her. This is not something we take lightly and decided that is was time to end the non-existent life she was now enduring. She was not eating, drinking only tiny amounts, walking was a challenge now and apparently she could not see any more. These all happened in about a 48 hour period of time. She was fading fast. 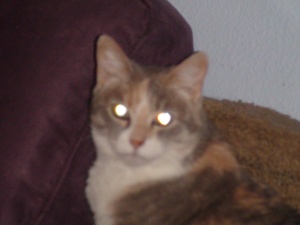 We sat with her for a while on Saturday afternoon before going out for a few hours and surrounded her with love and attention, as much as she could handle us giving her. Her purring had returned but was largely diminished. Although she could not see us my wife and I are certain she could feel us stroking her head.

When we returned later that night, Manu had passed. My wife and I were greatly saddened but relieved that her end had come swiftly.

We are having her cremated and her ashes will be spread upon one of the Public Rose Circles in Portland where we can visit and be reminded of her.

Her litter mate Axl seemed to know something was up and although he did not avoid Manu in her last days, he did not interact with her in the same way. He had stopped licking her in the incestuous way cats have a way of doing but did let her snuggle up close to him for warmth as she had lost so much weight so rapidly that staying warm was key for comfort of any sort.

In her final days she followed me around from room to room just so she could sit in my lap or next to me in the chair. I would lay on the floor with her and made sure she knew where her food was as her sense of smell had mostly gone away. Seeing her in that condition, in stark contrast to just 3 weeks before, was heart breaking.

I think I will always remember and miss most about her in no particular order are her mad flopping skills, her super purr-box, the way she would nuzzle the bottom of my chin with the top of her head and finally the way she would lap-bomb everyone if she had the chance. She was not shy in knowing what she wanted and taking it when the opportunity arose.

My love for her can only be gauged by the sadness I feel at her absence.

Although I don’t notice it yet or see much reaction from him I am sure that Axl feels her loss too.

3 Responses to A Tail of Two Kitties – Manu & Axl