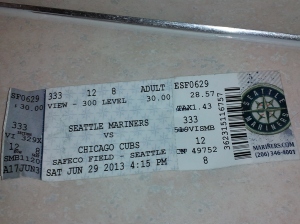 The Ticket to my first ever MLB game.

Over the weekend my wife and I drove up to Seattle to visit with her sister and her family. Also in attendance was my wife’s mother and father. We had planned on meeting up in Seattle so that we could all go to a Major League Baseball game. The Seattle Mariners were hosting the Chicago Cubs at Safeco Field.

This would be my first time going to a MLB game. Even more exciting than that was that it was the first time that my niece had also been to a MLB game. This was a birthday/father’s day present for my father-in-law who grew up or was born or raised in Chicago. I forget which but his loyalty was for the Cubs without question.

The great view on the way up to our seats.

I think I was more excited to see my niece enjoy the game as her father explained the different positions each person on the field held and what their respective roles were that initially watching the game myself. I think part of her excitement came from the “buzz” of being around so many people who were getting loud and raucous.

While we were there we enjoyed overpriced beer, super frozen ice cream that came in the form of little tiny balls like the little Styrofoam balls you get when you deal with anything Styrofoamy and caramelized popcorn.

I will admit that I was skeptical of going to the game as I thought it would be about as fun as watching paint dry…but it wasn’t terrible at all. I actually enjoyed myself. The pace moved pretty good and you got to watch whatever you wanted to instead of just what the camera showed you. It was as much about the environment in which we were watching it as the game itself.

These were our seats.

I thought the view was really good and we were out of the sun the entire time and on a day when we got into the 90’s (I think) that was a good thing.

Finally, I can’t forget to mention that maybe the best thing I saw was when my father-in-law got so excited when the Cubs outfielder rocketed a shot to home plate that made it in one bounce to get the player running home out. It was such an awesome throw that you were mesmerized by whether it would get to the plate before the runner did. When the catcher caught the ball and tagged the runner out he was so excited, maybe the most I have ever seen him. This was definitely his game and I am glad I got to share it with him.